QUALITY…UNSEEN
IN THE BEST PLACES 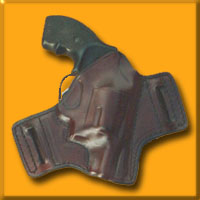 I can name a dozen manufacturers of holsters. Any of which mass produce more in a day than I craft in six months.

It seems that almost anyone can wrap a piece of leather around a gun, call it a holster and sell it to the unwary.

Like most professionals, you’ve probably tried many holsters from several makers, but . . . independent studies have shown that the above average professional experiments with as many as fifteen different holsters manufacturers before compromising something.

A potentially costly compromise, which often leaves a nagging doubt that there must be something better . . . and there is!

As a highly trained specialist your equipment is – or should be – the best! I picture only a few of the numerous designs of holsters and accessories I have available. They are all specialized, carefully engineered and some designed to accommodate any attachment for method of concealment your job requires. If not, I’ll work with you to solve your problem.

Each holster has been progressed through a series of hand formed prototypes . . . tested in house and by experts in the field . . . until it is flawless. Then the highest quality leather obtainable is carefully cut and patiently formed around real handguns to the least possible tolerance between leather and steel personally by me.

Each scabbard is individually hand crafted to the exacting demands of the discriminating professional . . . who demands efficiency and the utmost in concealment.

Meticulously I design and fabricate each holster assuring its speed, security, uncompromising precision and comfort. These functional works of art stand unchallenged as one of the world’s finest holsters . they were previously available only on a limited basis to a select few individuals, but are now being bench crafted exclusively for the professional…YOU!

I do not and will not cater to the weekend gun slinger or produce Hollywood cowboy rigs . . . if that is what you think you need, you’re reading the wrong catalogue and wasting both your time and mine!

You’ll never own a cheap NULL holster . . . but you’ll surely own the best . . . remember, there is no compromise for quality when your life depends on it.

Sooner or later, if you really care, you’ll live with my holsters.

I’ll be patient . . . I think I’ll hear from you eventually. It’s just a matter of time and logic.

I can afford to be patient . . . but then I don’t have to put it all on the line every day.

QUALITY . . . UNSEEN IN THE BEST PLACES

Also available for most popular current and time honoured pistols and revolvers.

****All items are custom made to customer’s request and I have no return policy unless defective in material or workmanship.****

QUALITY…UNSEEN
IN THE BEST PLACES